Singer and actor Seo In Guk recently stated that he was envious of fellow actor Lee Jong Suk’s body.

Seo In Guk recently made an appearance on cable channel tvN’s “Talk Show Taxi,” in which he divulged everything from his rivalry with Lee Jong Suk, who he appears with in the movie “No Breathing,” to his ideal type of girl.

He revealed that as much as the movie “No Breathing” was centred around swimming, the actors spent most of the time filming topless. “Lee Jong Suk’s body is really nice. He started out in the modelling field, and he’s really tall, so while preparing for the movie he also build up his body. His body was pretty great. That’s why I had a inferiority complex,” confessed Seo In Guk.

Park Chul Min, who plays their coach in the movie, compared Seo In Guk and Lee Jong Suk to race horses, “Lee Jong Suk is like the horse who has run a couple of races, In Guk is like a wild horse who’s just started racing. He’s like a horse which has been bridled and saddled and is now being tamed.”

Lee Jong Suk had previously compared his own body to that of Q-tip at the press conference for the movie.

Seo In Guk and Park Chul Min appeared on the October 28 episode of “Talk Show Taxi.” 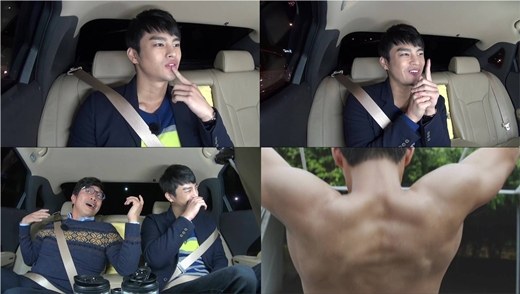